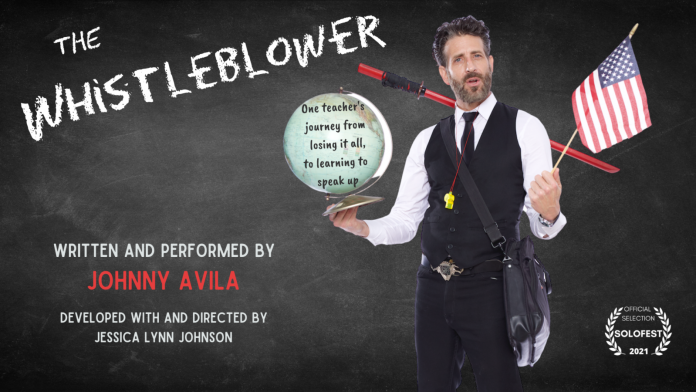 “The Whistleblower” is wonderful and heartfelt solo play that takes us through the life of Johnny Avila and his long winding road to his true calling. Teaching.

Johnny’s story is all about overcoming his fear, finding his strength and purpose, and pushing himself to limits that only he had set for himself.  After traveling, some pretty intense life changing and highly risky moments involving big river rapids and very small boats (yet another reason why I will never go river rafting), he became an agriculture teacher in the Central Valley of California.  The hardest job in the school system, or as he puts it, “the marines of teaching, the first ones in and the last ones out.”  Clearly a brush with death in the jungle taught him something!

Born into a big farming family in California, Johnny was determined to belong to something bigger than himself, in his career too.

From his modest beginnings as a teacher, to running the last FFA program in Santa Barbara County on a zero budget, and a wing and a prayer. All while fighting the corrupt school district system, or what he calls, the “funding games.”  His empathy is as obvious as the size of his heart and it is this, I am sure, that helped him connect with even the hardest to reach of his students.

“The Whistleblower” is a lovely show. And unique in the way that Johnny’s life seems to have been.  He has a calling, and the calling to help and to heal has taken him on quite a journey.  Achingly earnest, compassionate and kind, Johnny was driven to teach by his obvious and deeply held sense of justice and hope.

Unfortunately, the school system in this country, despite many teachers just like Johnny, who push as hard as they can for fairness and equity, is broken.  Perhaps our new Education Secretary, Miguel Cardona, an actual educator, can help unravel the twisted maze of corruption and contradictory ethos that seeks to keep those who we should cherish and admire, our children, trapped in a failed system. We will have to wait and see.

In the meantime, I for one am relieved to have Johnny Avila on our side!  Bravo!!!  If Johnny’s story doesn’t inspire you to get out there and take part in our world, I don’t know what would!

How can you support North Hollywood theaters? See a show! We have 20 theaters in a square mile.

Samantha Simmonds-Ronceros is a British writer and filmmaker living In Los Angeles.

Growing your Small Business with these Different Types of Marketing

Business of Being an Actor Series 2022 – PART I