THE STATE OF ART FILM: An exclusive interview with Greg Laemmle 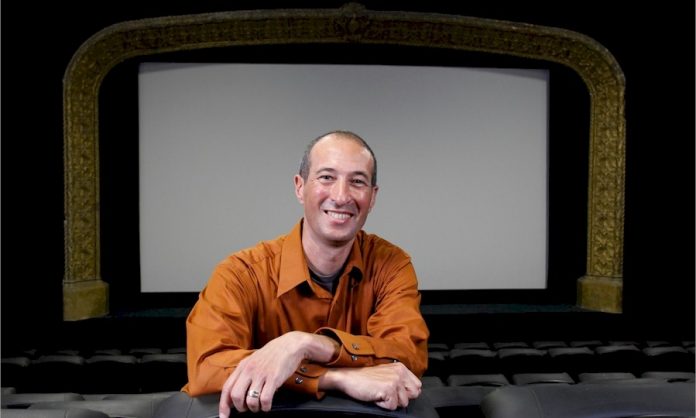 THE STATE OF ART FILM: An exclusive interview with Greg Laemmle

The Laemmle NoHo 7 Movie Theatre is centered in the heart of the NoHo Arts District. A quick walking distance from the Metro Subway/Train Station and the Television Academy.

I sat down with Greg Laemmle to discuss the state of art film, the direction it’s going and how the NoHo Arts District- Lankershim Blvd.- is rapidly re-developing into a bustling ‘Walk Friendly’neighborhood.

Waide- Hi Greg. Thank you so much for taking time to talk to me about your theatres. I’m going to start right off on the Ownership question. Which generation are you in with the family business and how were you introduced to it?

Greg- I’m primary Owner. I’m third generation in the company and running it on behalf of the family. It’s very rare that a family can make it through three generations in a business. I did feel pressure to do it, but… I love film… or grew to love film. I love our product. Unfortunately, it’s not always about the product. It’s not always about just watching movies. There’s a lot of other things that go into it. It is a business. I found that a lot of the things we do, so much, during expansion mode in the building of our new theatres… where we locate… how we partner…  also, there must be a shared passion of mine for urban planning and neighborhood development.

Waide- Laemmle West Hollywood on the Sunset Strip. I went there on a regular basis. It’s no longer there. Lots of talk, but what really happened?

Greg- Two things… at one point it was one of the hottest theaters in the country. Then the ArcLight opened up, then the Grove opened up… that’s a lot of competition to absorb. We stayed open longer than the Bev Center and Beverly Connection in terms of maintaining an operation… but, ultimately there was a hit to revenue. That hit to revenue was happening at the same time the ball was changing hands, where we were located, they started a major  renovation. That renovation took way too long. We had to stay open through all that. Which means our patrons were walking through construction zones, they instituted automated parking structures that were very poorly implemented… so, it got to the point where our lease was up and we went to them and said we want to stay, but this is what we can afford… their complaining about the manner we were taking care of the theatre in the last few years. Given the lease was more than we were going to pay, we weren’t going to, in short term, going to fix the place up. Basically, they wanted to bring in a new operator. So, then at some point, there is a concept in mall development that you want to refresh the mall sometimes. By changing tenants, you know. If you just renew the same tenant, even if they do fix it up, the public doesn’t perceive a change. They wanted to make a statement by bringing in a new tenant. So, they got Sundance… which, of course, is now sold… (he chuckles)… sold to Carmike Theatres just a few months ago.

Waide- Do you know why this happened?

Greg- The money behind Sundance Cinemas was Venture Capital money. They stayed with it as long as they could. At the end of the day, Venture Capital is about turning over and finding opportunity. It’s a business. In their interest, five years is a long time. For us, twenty years is maybe short term. (He laughs like he just locked a business deal) Interestingly, timing was such that this theatre opened a month or so after the Sundance closed down. So we knew that NoHo was going to be the replacement.

Waide- What can the community do to keep art film/independent film thriving?

Greg- Short answer, buy tickets! Long answer, be an active consumer. I mean that as an ‘active and informed’ consumer. Back in the day when the newspaper was everything… and we had important critics, we still have important critics in Los Angeles, thankfully, but many communities don’t, but when the paper was everything… it’s… it’s… defused now… there’s a lot more information out there now. There’s not really one thing that can motivate. In the critical, there’s not just one singular. And what steps into the vacuum is ‘Marketing.’ Independent film, other than the corporatized independent film, is at a disadvantage. They don’t have marketing muscle. Independent film relies on critical support, reviews, buzz, film festivals… the information is out there to motivate people, but you kinda have to look for it. Checking our website, checking other important community bulletin boards. All these can help guide you to the films you want to see and the films that need your support. Being aware is important to the consumer. Knowing where to go.

Waide- What is the ‘state of art film’ today?

Greg- I think the state of art film… the production is terrific! Technology has made it easier for people to make movies. The opportunity to tell stories is greater than ever. Of course, there’s a lot of bad movies being made. International film has grown, too. Quality world cinema is being made in Israel and Romania… Fabulous films coming out of Israel. Any country you want to mention, there’s a whole series of films you can see. And Documentaries… a huge explosion of documentaries. It’s a great time for film!

Waide- Where do you see it headed?

Greg- I see some great growth in the art exhibition market place. We go every other year to Art House Convergence. It’s a gathering of art house cinema operators across North America. More and more of these are community supported not-for-profit organizations… people who banded together and saved the old single screen theatres of Downtown or wherever… but, if that’s the model that needs to happen to survive or get the business started, then so be it. That’s great. We probably have more in common with those people than less in common. Even if you run on a not-for-profit basis, you still need to get people in the door. Not-for-profit status is used more for ‘audience development and education programs.’ Not just for showing movies and the core business. Here at Laemmle Theatres, we will continue to invest some of our profits back into community resource development.

Waide- What are your future plans for Laemmle Theatres?

Greg- We’re expanding. Actively expanding. Glendale, a 5 Plex, to open in 2017. We’re approved for a project in Old Town Newhall in 2018. We’re approved for a project in Azusa for 2018 or 2020. We are following this model of locating in transit districts… where we think the community will add housing near transit. Makes sense. But, they recognize that if you really want to attract residents to the area, you need restaurants, weekend life, arts and culture districts… are really an important part of the transit oriented development. And what we do, and not just for the programming we do, we build neighborhood scale movie theatres and encourage patrons to walk and leave the movie theatre to walk over to the cafe, restaurant, store. It’s the perfect fit.

Waide- Are you responsible for these decisions?

Greg- Yes. Ultimately, I am.

Greg- Anything by James Brown.

Waide- Love James Brown! Would you like to add anything regarding Laemmle?

Greg- I always love feedback from the community. How can we continue to serve the community? We have a monthly series, Throwback Thursdays. Films from the ’70s’ and ’80s.’ Not necessarily art films… Kubrick in July… We try to understand the audience. Lots of change coming to NoHo with the development of the Metro property, which will be advantageous. I am personally one to want to make Lankershim less of a driving street and more of a walking street. The community has a real opportunity to create a real urban experience by walking Lankershim Blvd. I encourage people to embrace it.

Waide- Thank you, Greg, it’s been a pleasure.

By Subway/Train, from Downtown or Hollywood, take the Red Line to the NoHo Station at Chandler & Lankershim, walk south approximately 1 block/on the east side of the blvd.

For more happenings and programs at Laemmle, check out the theatre’s web site: www.laemmle.com.

Waide Riddle is an award-winning author, poet &amp; screenwriter.He is the author of the paperbacks "The Power of Summer!," "Dear Tom Hardy: I Love You!," "The Night Elvis Kissed James Dean," "They Crawl on Walls," "Midnight On 6th Street" and "The Chocolate Man: A Children’s Horror Tale." All available via Amazon.Many of Waide’s poems and literary works are archived at the UCLA Library of Special Collections, USC ONE Institute/LGBT Library, Poets House/NYC, Simon Wiesenthal Center/The Museum of Tolerance &amp; the Bodleian Library at Oxford University.Mr. Riddle is also an award-winning filmmaker. His short films "LOST HILLS, CA.," "Two Men Kissing" and "The Lines in Their Faces" are Official Selections and available via Amazon Prime.He is a proud member of: SAG/AFTRA and Sundance Association for Country-Western Dancing/San Francisco.Waide was born in Kingsville, Texas and raised in Houston. He now resides in Los Angeles.

Waide Aaron Riddle
Waide Riddle is an award-winning author, poet & screenwriter.He is the author of the paperbacks "The Power of Summer!," "Dear Tom Hardy: I Love You!," "The Night Elvis Kissed James Dean," "They Crawl on Walls," "Midnight On 6th Street" and "The Chocolate Man: A Children’s Horror Tale." All available via Amazon.Many of Waide’s poems and literary works are archived at the UCLA Library of Special Collections, USC ONE Institute/LGBT Library, Poets House/NYC, Simon Wiesenthal Center/The Museum of Tolerance & the Bodleian Library at Oxford University.Mr. Riddle is also an award-winning filmmaker. His short films "LOST HILLS, CA.," "Two Men Kissing" and "The Lines in Their Faces" are Official Selections and available via Amazon Prime.He is a proud member of: SAG/AFTRA and Sundance Association for Country-Western Dancing/San Francisco.Waide was born in Kingsville, Texas and raised in Houston. He now resides in Los Angeles.