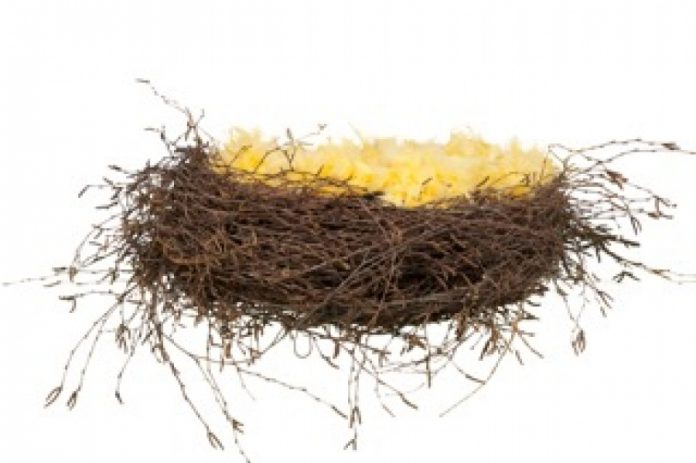 I wish I’d known the significance of the hummingbird nest I saw built right before my eyes outside my bathroom window this spring.

In-step with every awesomeness those birds possess, I watched the mama weave and wind twigs and spider web threads around the tip top of my wine bottle wind chime. When she finally finished, she sat quietly on top her creation–that is until I blinked and she’d be gone. Blink again, and she returned.

This went on for a week or more until the theater changed. Mama no longer sat atop the nest because two needle thin beaks now poked up straight into the air. Blink. She hovered over them with magical motion and fed their opened mouths. Blink. She’s gone. She flitted back and forth for maybe two more weeks until I could sense a restlessness in that nest. One beak up, the other missing from sight. Two beaks again, then none. It had gotten tight in there. I could only imagine the two of them twisting and turning to get more comfortable. I had heard that hummingbird babies finally leave the nest after it becomes too small for their tiny bodies. They drop to the ground, but mama continues to feed them there until they are ready to go on their own. Kinda reminds me of our own babies evolving into adolescence and then the big adult “beyond.” Wouldn’t you know it, it is. And Me-Mama-Big-Butt-Humming-Head is having a big bad case of empty nest syndrome. Honestly, those three words hadn’t occurred to me until I sat down just now to write this post. I knew something was brewing inside of me, but I hadn’t a name for it yet– pride, confusion, elation, or grief? Turns out it’s all the above and a syndrome, no less. Makes it sound like you’re going insane. Well, you are.

My son’s launch off to college was only a mere twelve hour drive up to Northern California. The thought of not having him anymore in the next room drove both of us crazy. We eased the transition by designing his new portal at his apartment with young-manly stuff, grays and blacks being the main color scheme. We brought strands of light, stuff for the walls, and pots and pans that will probably never see the light of day. We met his roommates (and in a couple of cases, their obnoxious Republican families) and talked positive about the school, the beautiful grounds, the great town, and the future. But nothing could escape the underlying sadness or apprehension of a mama and son’s girlfriend leaving to go back home while son stayed to start a new life. Yup, the silent, droopy-mouthed, and glassy-eyed trio seated at the table amongst a crowd filled with laughter and Italian sauce was us. I’ll tell you, it was almost impossible to say something upbeat while blowing snot into a restaurant napkin.

Personally, I can’t imagine what it’s like to go to college because I never did. My second generation Lithuanian-American parents hadn’t gone so they didn’t know how to push their four girls into it. No¬. Instead I left my folk’s nest out of rebellion. It was the 70s after all. Not wanting to make the same mistake as my parents had, my ex-husband and I encouraged my son to continue his education, although I have to say I still approached the subject with their inherited ignorance. I hadn’t the first clue how to pick a college let alone pay for one. As it turned out, it wasn’t my choice anyway and due to heavy influence of my son’s friends, he chose Humboldt University, in the middle of nowhere-near-the-house. So I got ready. Ready for the change, the departure, and the separation. “He’s going on vacation,” I said a million times to myself. “We’ll plan our visits in increments. Why Labor Day and Thanksgiving are just around the corner!” But after looking at nine-hour flight schedules to travel in just ONE state when it took merely ten to drive straight through and up, the prospects of seeing him as often as I wanted started to look unrealistic. Bite the bullet. This is going to be a tough one.

I’m going to be short and sweet and honest here. There is NOTHING anyone can say to me right now to make me feel any better. Of course I’m thrilled for my son’s new venture and I’m absolutely gleaming with pride that he is truly thinking about making his mark in the world, but I still miss my boy. There are no shoulda-woulda-coulda’s with this event in my life. If I was able to turn the clock back, I’d do it in a heartbeat. But as I repeatedly said to my son over those last few days on his new turf of life, we must move forward because we have no choice. Besides, that cryogenics idea I had to freeze my son at age thirteen didn’t happen like I had planned. And like the hummingbird nest outside my bathroom window, mine is also empty–although my baby has flown the coop to become a full-on eagle.

Your Body Is a Space that Sees