HoHo NoHo! Here are the NoHo shows this holiday season!

So what are you going to see in NoHo this holiday season?

We do holiday shows in the NoHo Arts District! If you’re not in the holiday spirit, you should definitely check out one or all of the shows we’ve put together in this handy, Christmas Show quick list. If you have guests visiting, a show is a nice treat or gift. It’ll also give your guests a little taste of theatre in the NoHo Arts District and you can dazzle them with your knowledge: NoHo has 20 theatres – the highest concentration of theatres outside of NYC.

Have a happy holiday season! 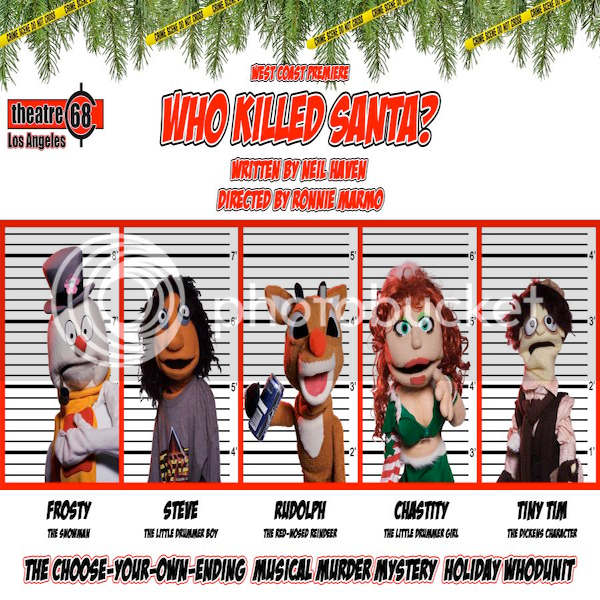 In this hilarious and irreverent send-up, Santa is hosting his annual holiday party attended by the usual holiday favorites: Frosty, Tiny Tim, The Little Drummer Boy, and Rudolph, who all have a bone to pick with Santa. After the introduction of the sexy new Little Drummer Girl, tempers flare, and Santa ends up with a candy cane through the heart. No one will confess, no one can leave, and Christmas is in jeopardy. As the tension builds, a couple of incompetent detectives enter the scene, and all the dirty secrets of these iconic holiday characters are revealed. Eventually, with the help of the audience, the murderer is convicted and sentenced. Who Killed Santa? is an alternative adult show featuring four possible endings, parodies of holiday songs, drag, and gratuitous violence.

In this hilarious holiday farce, Dean and Joanne want one perfect family Christmas before they retire to Florida but are surprised to find Grandpa Logan dead at the same time their children arrive. Their daughter, Christine arrives home with her Jewish fiancé but is afraid to tell her mother she is converting. Adam, the middle child brings a girl Katie home with him only to seek revenge, and their youngest son arrives with a big bag of grudge. Chaos ensues when the parents attempt to hide Grandpa’s recent death by dragging his body from room to room.

The Jew That Saved Christmas!

Zombie Joe’s Underground Theatre Group proudly presents Andy Shultz’s holiday comedy extravaganza “The Jew That Saved Christmas!”. When Hanukkah falls on Christmas Eve, all Larry Epstein wants to do is eat Chinese food, watch movies and hide from the holidays. But when Christmas is threatened and lives are in peril, Larry is forced by the people in his life to be the Jew that saves Christmas! This is sure to be one holiday show you don’t want to miss!

High above the city of L.A., a team of terrorists has seized a building, taken hostages, and declared war. One man has managed to escape. An off-duty cop hiding somewhere inside. He’s alone, tired…and he doesn’t like Christmas. Come see a stage version of the holiday classic, complete with action, humor, Professor Snape taking people hostage, singing, dancing, the guy from ‘Family Matters,’ guns, puppets, explosions, the EPA guy from ‘Ghostbusters’ getting punched in the face, and Christmas miracles and familiar holiday friends galore. Maybe even an appearance by the legend himself, Santa Claus! Yippee Ki-Yay, Father Christmas!

Santasia – A Holiday Comedy, created by Shaun and Brandon Loeser and choreography by Tania Pearson-Loeser, is the perfect blend of Yuletide snark and sentiment. Santasia’s relentless assault on your Holiday funny-bone will have you hurting from laughter. It’s beautiful sentiment will have you longing for your own memories of Christmas past. Santasia is a holiday stocking filled with laughs, music, charm, wit, love, and lots of surprises! Hilarious choreography, on-point holiday parody, side splitting sketch comedy, and classic Rankin and Bass inspired claymation movies, the multi-media Santasia is the fresh face of Vaudeville Comedy.

“A lively and appealing actor…Wonderful Life could well have an active future on stages around the country.” – The Washington Post

George Bailey’s struggle to grasp why life is worth living finds a fresh voice in this enchanting one-person (Jason Lott) retelling of Frank Capra’s classic film “It’s A Wonderful Life.” “Wonderful Life” reinterprets the well-known screenplay and reintroduces audiences to the residents of Bedford Falls, New York on a fateful Christmas Eve in 1945. Audiences, young and old, well versed in the movie and not, will find plenty to love. The show is adapted for stage by Lott and Helen Parfumi. Parfumi also serves as director. Closing night, Dec. 20 is also a benefit performance.

Jingle Bell Jukebox is our holiday celebration for the whole family this year and a delightful surprise treat awaits you. This family holiday show will have you “rockin around the Big Oak Tree with Christmas Cheer from Yesteryear” starring Debbie Briggs, Katie McGlynn, Minta Mullins, Dave Mussen and Erik Hogan.

Once upon a time, on a cold winter’s night long, long ago (cold by L.A. standards, anyway), the Road began our annual holiday tradition of reading Dickens’ A CHRISTMAS CAROL. This December, the tradition continues! Please join us for A CHRISTMAS CAROL, two performances only…

The Soraya Celebrates the 10th Anniversary and Reopening