“Betty Rox the World of Dancehall” 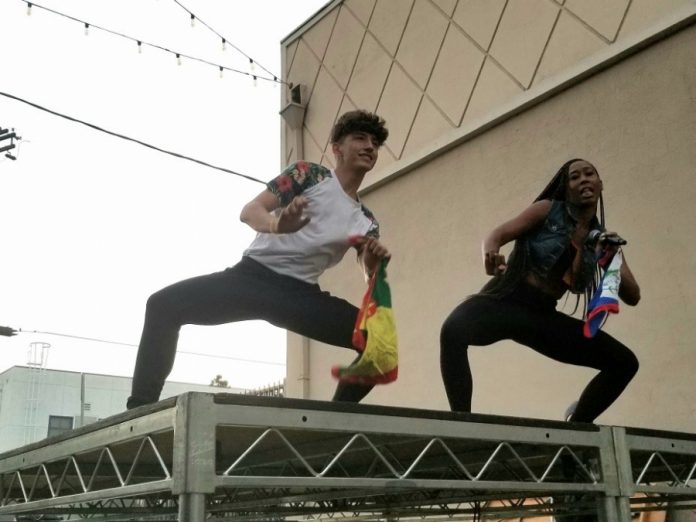 “Betty Rox the World of Dancehall”

If you were walking down Lankershim Blvd. on June 29th, you may have gotten a chance to absorb some of the energy that was coming off of the Green Dot Plaza. You could hear the good times rolling from blocks away, giving the soul of North Hollywood a boisterous sound. The night was illuminated by Soca music and Dancehall rhythms, which were a clear indication that the NoHo community was out and ready to party!

Betty Rox was the first event scheduled for the NoHo Plaza experience this summer. I was so happy to see her on the calendar that I couldn’t miss the opportunity to support. Even after knowing her for over 12 years, I still learned so much from actually taking the class. She broke down the names of each dance that comes out of the Caribbean and gave the backstory of who made it up or how it got its name. It was one of the most interactive vocabulary lessons I’d ever had! We waved our flags around until the subdued summer sun set behind the buildings, but that’s not even half the story.

L: How do you remember ALL those names of the dances? Which one is your favorite?

BR: I remember them by muscle memory. I’m immersed in the culture and train in the style of dancehall so I know who made them up and the meaning behind them. There are dances that come out in the Caribbean almost every week. I have a group of favorite dances every year, but my favorite is the “Hot Up” created by a dancehall queen in Jamaica.

L: You were wearing a feathered headdress at the beginning of your NoHo Plaza class, what does that symbolize?

BR: I wore the headdress because I teach Soca and I teach Dancehall. I think it’s important that people know the difference because a lot of people tend to take the genres of Reggae, Dancehall, Soca, African and throw them all into one pot. I like to give the education that Soca is derived in Trinidad and Tobago and along with that style comes the costumes, the style of dances, and certain inflections in the music.

L: How do you feel about Dancehall being so commercialized in mainstream media?

BR: “I have really strong views on the commercialized versions of Dancehall, Soca, and the culture in general. I had to realize that people are just uneducated. They don’t know until they take the time to dig to know that certain things are extremely inaccurate. Some people know some people don’t so it’s my job as an instructor, choreographer, and Dancehall dancer to put out as much education as possible. Especially since I’m in LA or “Hollywood” where choreographers will constantly throw dancehall moves into routines. I feel it necessary to give as much as I can with the voice I have. I can’t say that I’m not happy about it because were being placed in such a great limelight, but it’s the fact that they aren’t building the actual culture. So when I see people doing something wrong, it’s my job to say ‘hey this move is done this way’ or ‘this is the real name of that dance’. Not even in a caddy way, but just so people know to educate themselves instead of teaching people random things and putting watered down movement in their videos. I recently posted a comparison to a video I did with the Roxstarz to Justin Bieber’s Sorry music video, not to be spiteful but to make known that the dances she’s doing and the way she’s doing them are a replication of dancehall movement in which she has yet to give us credit for. In magazines, they’re giving her props for creating something new and she never once took the time to say,” No this isn’t my style. It’s something I learned from a culture in the Caribbean.” I battled with if I even wanted to say anything, but it was borderline inappropriate to receive so much fan-fare over something you knowingly pulled from someone else’s art, music, and physical literature.”

It was 2003 and I was a senior in high school. Riding the 212 bus down La Brea into Inglewood was a daily trip for me. During the 40 minute ride, I’d see almost every type of person along the way. The most entertaining thing to do on public transportation is people watching; wandering what their story is and where they’re going. I met a lot of interesting characters and had some great conversations, but I’ll never forget the day I met a young lady named Vania aka Betty Rox.

I was always on the bus before her and every time I noticed her getting on, she’d usually have her wardrobe on point from head to toe. Imagine fresh red and white high top sneakers with thigh-high baseball socks, some ripped jeans, a shirt she hand cut into her own fashion statement and a fitted hat. She normally kept to herself by sitting in the back with her headphones on, but the eyes of intrigued riders would follow her all the way to her seat. Of course, there were days when she was in more laid back attire sporting sweat pants and a track jacket, but her superstar vibe still shined right through it.

One day I struck up a conversation with her. She told me that she’s a dancer and was always going to auditions after work. By this time I was already working with an agency as well, so it felt like fate that I’d meet someone that only lived a few blocks away from me who was so passionate about pursuing a career as a professional dancer. Soon after that, we started working under the same management company. One of our first major opportunities was Christina Aguilera’s Dirrty video then we started performing all over LA in each other’s live performances. The world is so small, that almost a year later I found out that she happened to be best friends with two beauties named Zshatwa and Alex who were in my dance class at West LA College. When Zshatwa started recording music, Betty and I worked as co-choreographers on the project.

Since then, we’ve been blessed with countless experiences together. We’ve confided our fears and joys about the direction of our careers in each other and recently celebrated a new chapter of life at my wedding in February.

One of my most cherished memories is when we danced in an online competition called Jerk All-Stars. A manager friend of ours recommended that we get in on the action which led to us to asking KLove and Q Burdette to join The Animaniacs. It was extremely short lived, but the power we had as a group and the way we moved the crowd was like lightning hitting wet pavement.

Now here we are, over 13 years after meeting on the Metro and I still find ways to be in awe of her talent and poise. After working in the industry for some time, we both came to a place in our lives that we felt a desire to teach recreational dancers. Professional dance studios, as in many other professions, were riddled with more politics than we wanted to deal with. The goal was to uplift and empower dancers of all levels; helping them feel uninhibited and comfortable with movement so that became the main focus.

A Caribbean inspired class started as a whisper on the fitness scene and now speaks to hundreds of thousands of people around the world who can’t get enough. No matter what day of the week you step into Betty’s Soca X Dancehall class, it’s a sweat pumping party that your body and mind benefit from. You walk out ready to tell someone about what you learned. Her combos get your body into positions you may have never thought you’d do, but the vibrant energy makes you move all doubt to the side and just go for it!

BR: I think a lot of people don’t understand that the dances are created from everyday lifestyle. You could just be walking down the street and you trip over a rock and that now becomes a dance! It’s interesting how they {people in the Caribbean} come up with things off everyday situations. That’s why it’s so easy to catch and fun to do!

And the World Choreography Awards Nominees Are…

“Undanced Dances Through Prison Walls During a Pandemic”

How to Handle Your Inner Creative Critic