It’s March and the time we officially celebrate the history and accomplishments of women around the world, and right here in Los Angeles. The NoHo Arts District dot Com team celebrates Women’s History Month every month but even more so in March. So we are proud to support Los Angeles Female Playwrights Initiative and Little Black Dress INK as they present a day of free playreadings and connections to celebrate Support Women Artists Now Day.

WHAT’S SWAN DAY ACTION FEST?
The day’s events include readings of plays written and directed by women, as well as two sessions of Micro-Reads (open to women writers in attendance) and opportunities for theatermakers (of all genders) to network and find future collaborators — women artists working in Los Angeles.

In addition to the playreadings, the day’s events include impromptu Micro-Reads: one page of writing performed on-the-spot, directed by Lynne Moses and Laurel Wetzork. To have work included as a Micro-Read, women writers should visit guidelines at lafpi.com/events.

March 29, 2014 marks the seventh International SWAN Day, a holiday designed to showcase the power and diversity of women’s creativity. Sponsored by the Bay Area organization WomenArts, SWAN Day has been celebrated with over 1,000 events in 23 countries. This is the first public arts event in Los Angeles created for the holiday. 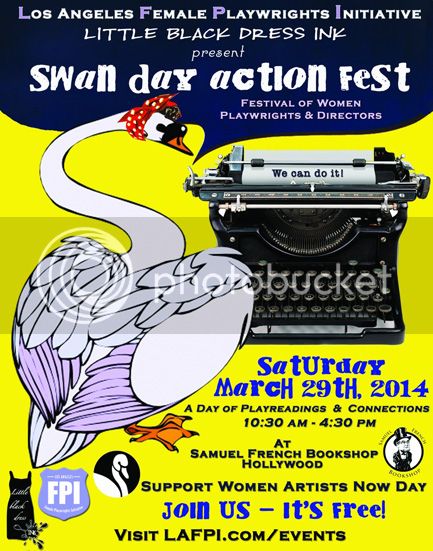 “We love having LA FPI here,” says Hollywood bookshop manager Joyce Mehess. “It’s always inspiring and fun and spontaneous — no stuffiness about anything. And with the festival it will be great to see fresh ideas come alive on our own stage. It’s exciting to have live theater under the bookshop’s roof.”

Performers for playreadings and Micro-Reads will include actors from The Vagrancy, a female-helmed L.A. theater company that partners with LA FPI in producing bi-monthly Tactical Reads, plays written and directed by women. Plays to be read in SWAN Day Action Fest were selected through a blind, open submission process curated by Little Black Dress INK.

Little Black Dress INK is an organization dedicated to creating production opportunities for women and to strengthen the female playwright network. Now in its third year, Little Black Dress INK’s Female Playwrights ONSTAGE Project will present readings of short plays by women in Sedona, AZ; Ithaca, NY; and Santa Barbara, CA beginning in April. ONSTAGE finalists will also receive a staged reading at the Los Angeles Theatre Center in May, and a full production in Prescott, AZ in September. More information can be found at www.LittleBlackDressINK.org.

Los Angeles Female Playwrights Initiative is an L.A.-based movement working to ensure that women playwrights are fairly represented on local stages and beyond. Formed in 2010, LA FPI has established itself in the Los Angeles theater community through its support and promotion of female playwrights and their projects. The results of the LA FPI Study, posted in 2011, were the first attempt ever to look at gender numbers in L.A. Self-reporting by playwrights and data from LA STAGE Alliance revealed a figure of 20% as reflective of the overall percentage of plays written by women in Los Angeles-area theaters.

In recent years, LA FPI and its co-founders, Laura Shamas and Jennie Webb, have been actively working with other organizations across the country and internationally to advance the gender parity movement.

For more information on the LA Female Playwrights Initiative and the SWAN Day Action Fest, visit lafpi.com. The site is set up as a hub for theater artists as well as theatergoers, with a popular Persons of Interest Blog, highlights of Women at Work Onstage in Los Angeles, the “What She Said” podcast and more.

How to Build Brand Loyalty in 2022