Yes, it takes all of us to raise a child.

Like many people, I don’t like to watch the news since most events being reported are sad and depressing. Well, nohoartsdistrict.com is reporting on a story that shows the “goodness” of humans right here in the NoHo Arts District. The story starts out with a kind and caring gesture by North Hollywood Police Division’s Senior Lead Officer John Catalano. Elijah and his mother Angelica enrolled one month ago in East Valley High School. They had been homeless and now are living in a small hotel room where there is one communal stove for 200 people. “Cooking a healthy meal for my son is difficult but I am thankful I have a roof over my head and a good school that Elijah calls his second home,” said Angelica.

I asked Angelica how she got into this bad situation when she had a Master’s Degree from the University of Cincinnati and a 10-year work history in TV and film on the east coast. She told me that she had an oral agreement from a cable station that she had the job and that she only had to move to Los Angeles. She and Elijah came to Los Angeles only to find the job was gone and that her life savings was depleted after looking for a job for three months. Fortunately, East Valley High has a team of professionals who truly care about their students and saw that this family needed help. School Principal Carrie Allen who treats all 800 students like they were her own stepped in. She told LAPD North Hollywood Division’s Lead Officer John Catalano about Elijah and his mom’s plight. Officer Catalano saw one thing that needed to be taken care of immediately. Elijah had on tennis shoes that were ripped so bad he was almost walking bare footed. Elijah told Officer Catalano that his mom was trying to find him shoes but she couldn’t find his size 15 plus they were very expensive. Officer Catalano on his time off ran to seven stores and finally got Elijah two pairs of tennis shoes. Officer Catalano didn’t want any fanfare about doing this wonderful deed because it came from the heart. 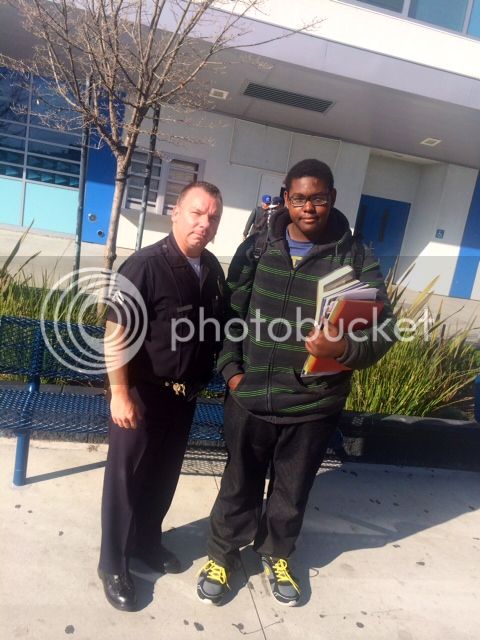 Elijah is only 14 years old but wise for his years. “We have been through a rough time but I know we are going to be okay because we now have people who care about us said Elijah.” This positive attitude comes from his mom. The first thing she said to me was that she was thankful for all the help she has received and now wants to give back to someone less fortunate than her.

Captain Whittingham of our North Hollywood Police Station told me that the station had “adopted” East Valley High and are committed to assisting students and families in a variety of ways. Elijah has enrolled in LAPD’s Cadet program and once again can dream about being an inventor when he grows up!

Elijah and Angelica still need a permanent home. I hope I can write another story about the good samaritan that found them that home! For any type of assistance for this family, please contact Carrie Allen, East Valley High Principal at 818 753-4400.

How to Be a Successful Solo Artist – Interview with Kevin Neighbors

Call for Playwrights for SPF13